After publicly launching in the U.S. this past September, Facebook Reels today is becoming globally available in more than 150 countries. The feature, which is a key part of Meta’s response to the TikTok threat, allows creators to share short-form video content on Facebook or cross-post Reels from Instagram in order to reach a broader audience. Alongside today’s global rollout, Facebook is also introducing more creative tools and new ways for creators to make money from their Reels through advertising, and soon, Stars.

While Reels first began as a way to directly combat TikTok with a feature inside the Instagram app, Meta soon realized it could mount a more powerful counteroffensive if it also brought Facebook into the mix. As a result, the company touted during its Q4 2021 earnings that Reels is now its “fastest-growing content format by far.” The company also said Reels was the biggest contributor to growth on Instagram and “growing very quickly” on Facebook, too.

However, Reels currently monetizes at a lower rate than other content formats, like Instagram’s Feed and Stories; but Meta believes this will change over time.

On that front, the company today is expanding tests of Facebook Reels Overlay Ads to all Reels creators in the U.S., Canada and Mexico. By mid-March, the test will expand to nearly all the 50+ countries where in-stream ads are already available, Meta told us.

Creators participating in the ad tests will be able to try out two different ad formats: banners and stickers. These are non-interruptive ads, as they sit transparently atop the playing content instead of pausing the video to show the ad. Banner ads appear as a semi-transparent overlay at the bottom of a reel, while stickers are static images that can be placed anywhere within the reel, just like other stickers can be. Facebook will then choose the ad to display in the frame that’s best suited to the viewer.

During the tests, Meta tells us that it will follow the same revenue share with creators that it uses today for its in-stream ads program, which is 55% to the creator and 45% to Facebook. But this could evolve as tests continue.

Creators who are already a part of the existing in-stream ads program will be automatically opted into the new Overlay Ads tests by default. (A small handful had already been invited to test these Overlay Ads over the past few months.) Others can check their eligibility and join here.

In addition, Facebook will launch full-screen and immersive ads in between Reels in worldwide markets in the months ahead. These formats had been in testing since October.

Not all Facebook Reels will have ads, though. Meta explains that whether or not ads are included in a reel depends on a variety of factors, ranging from advertiser targeting-setting to the value of the ad for the viewer. Creators can also choose to opt-out specific reels from banner ads in Creator Studio, if they prefer.

In addition to ads, creators will soon be able to monetize their reels with Stars, the virtual tipping mechanism that’s already offered on Facebook Live. And currently, successful creators are receiving direct payouts, too. The Reels Play bonus program, a part of Meta’s larger $1 billion creator fund, can generate huge bonuses — some creators earn up to $35,000 per month, the company says. But the long-term viability of creator funds is still up for debate.

Meta declined to tell us how much it’s paid out to Reels creators directly since the fund was announced last July. 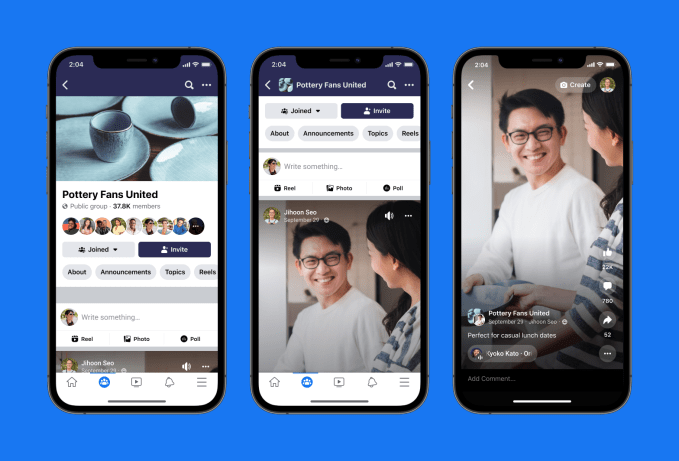 Remix, which is already available on Instagram, is similar to TikTok’s Duets, as it also allows creators to create their own reel alongside another publicly shared reel (or part of a reel) on Facebook. Now, this feature will be available to Facebook creators, as well.

Reels has been playing catch-up on video length, after TikTok extended its video length to 3 minutes, up from 60 seconds. Instagram Reels added support for 60-second videos last year, up from 30 seconds, and now Facebook Reels will do the same.

The other features, Drafts and Video Clipping, are still coming soon. Drafts will allow creators to work on their content then save it for later publication. The video clipping feature will roll out in the months ahead to allow video creators who typically publish live or long-form content to more easily try Reels, too.

As a part of its broader effort to invest in Facebook Reels, the company will also make the short videos a bigger part of the overall Facebook experience. Creators in all supported markets, not just the U.S., will be able to share their Instagram Reels for recommendation on Facebook.

In the weeks ahead, Facebook will allow users to share their reels to Stories, view reels within the Facebook Watch tab (which will soon also house Reels creation tools), and it will showcase Reels and creation tools at the top of users’ News Feeds (which are now just called “Feeds,” in another recent change.) In some countries, Facebook may also suggest reels you might like while you scroll through your Feed.

Reels is one of the largest product investments at Meta, which has publicly discussed the threat posed by TikTok, which Meta CEO Mark Zuckerberg has called a big competitor that’s growing at “quite a fast rate off of a very large base.”

TikTok, however, isn’t Meta’s only challenge. Facebook for the first time announced a decline in daily active users in Q4 — an indication that people simply aren’t using Facebook as much as before. At the same time, Apple’s privacy changes will decrease Meta’s sales by $10 billion this year, limiting its ads business. Meta understands that for Facebook to continue to succeed, it needs to court creators and offer users other things to do outside of social networking — like watching videos, listening to music or shopping — all areas which have received investment, too, in recent years.

Dream Hub Africa
Curating dreams within the African context and beyond one person at a time. Engineering Fundamentals and information for borderless and global leverage through transforming and impactful content and conversations.

Check out some amendments to Terra’s revival plan